The second METH event was in mid July and I had not come around to writing summary until now, nearly 6 weeks later. The topic was “Gender Equality + Feminism” and the goal was to invite a equal number of women and men to participate. I didn’t succeed with a 50/50 ratio, but we did succeed in having at least one male per group. 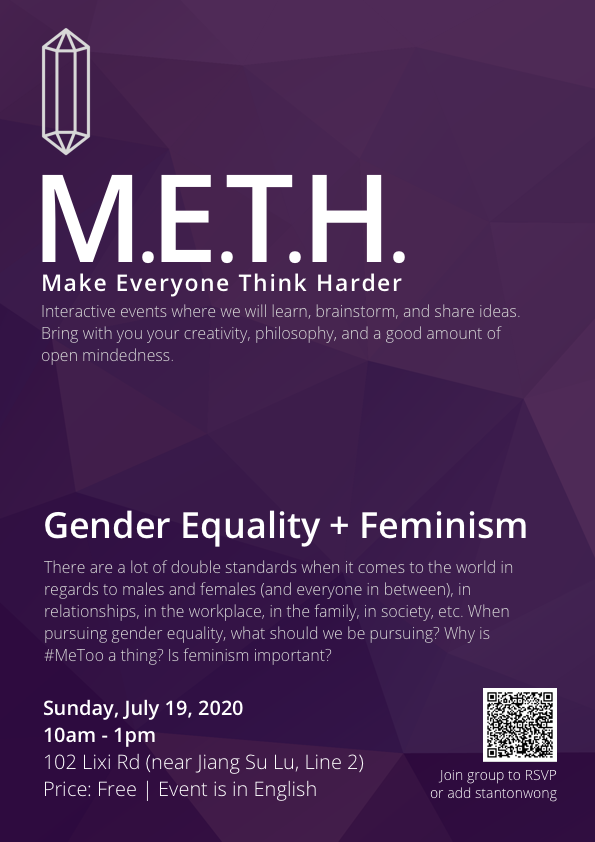 What I’ll be writing is based on the notes from the conversations that we had, so the content and logic might jump around a little. Note that this does not directly reflect my opinion, but there are interesting ideas in here that might provide valuable content to help Make Everyone Think Harder. And note that we did not dive into the topic of intersex, not because we don’t believe it’s a thing, but because we wanted to focus on a part of the conversation first.

1. What is gender quality + feminism?

Starting off, we invited all the participants to share topics that related to gender equality or feminism. There was a focus on women in work where gender inequality displayed itself, including the payment gap, issues around maternity leave, sexual harassment, and a lack of female leadership in businesses and corporations.

In regards to women in families, it was brought up that there are now divorce laws that include cool down periods, which might result in less opportunity to get out of domestic violence. Someone brought up that women had less control over their bodies than men, with conversations around pro-life and surrogates being only relevant to women. Additionally, there is interest in exploring who the family bread winner should be.

Lastly, some shared the liberal arts definitions of feminism, including how it started, the 4 Ways of Feminisms, and a quick comparison between chauvinism and feminism.

When it came time to sharing, the main focus was on women in the work force. The first thing to be shared was the gender pay gap and that the main reason for it is not actually due to gender. The gender pay gap is listed to be approximately 9%. The bulk of that 9% is caused by factors such as age, location, interests, etc., while the actual gender only makes up 5% of the 9% wage gap. I’m not going to dig in to the statistics of this, but there is merit in looking at all the factors that can affect this because there are wage gaps in everything. A counter example might be the male nurse vs the female nurse, where the male nurse makes less. Is there a hidden cost to being a male nurse? Is it due to supply and demand?

To continue, we also explored how there are more females in entry + mid level jobs while men took the majority of the top level jobs. Why is that? Is the selection process really a meritocracy? Probably not, as each person hiring will have their own bias. Is it a difference and male and female personalities? For example, that women on average are more weak willed and cannot cut it in tough environments? Statistically speaking, this might play into part of it in the sense that on average, women tend to be more collaborative and emotionally conscious to the people around them while men are more stubborn, obstinate, and single-minded towards their pursuit of their goal. This obviously does not apply to all women or all men, but is a general stereotype. Another factor is the idea of passing done legacies via the males in the family, so a lot of family businesses might lean more towards passing the torch over to the son instead of the daughter. Changing this will require changing the status quo. And lastly, where you were born. There are certain cultures that treat men and women differently, mainly lifting up men to positions of power while putting down women into positions of servitude.

The reasons for gender equality has to partly do with economics. The free market for the employees and the employer creates opportunities for discrimination, which led to a discussion on what kind of a free market should we be striving for. It is interesting to note that even countries like the US did not always operate with a free market.

At the end of the day, the changes needed will require government support in the form of policies. Policies that can help find more balance between men and women, for example, requiring both paternity and maternity leave instead of just maternity leave. The goal should be to provide more equality in opportunities, not necessarily strive for equal results.

3. What is the value for feminism + gender equality for men?

To explore this further, we wanted to see how men would benefit from more gender equality and the feminist movement. This is important because the ally that feminism needs is men.

The first thing we agreed on is that extremism in any way is bad and that we need to find nuance. We should look at changing gender role stigmas not only in the workplace, but at home as well. Society currently puts the family breadwinner pressure on men (in China, men are expected to have a car and an apartment before getting married), which can have an impact on male mental health and their masculinity, very critical when you consider that most men do not have an outlet to talk about these kinds of issues. Suicide rates are already higher for men due to the pressure.

There are numerous benefits from gender equality for men. In the work place, more women in leadership means more opinions targeting the female audience, which can in turn generate more value and money for the company. In relationships and family, gender equality can equate to a better marriage because there is less pressure on men to be the sole breadwinner and allow for the possibilities of house dad’s (which every male has fantasized being at some point in their life). Lastly, gender equality will mean more sex for men because women will be less slut shamed, meaning both genders can be more open about their desire for sex.

To finish up the M.E.T.H. session, we explored the approach to equality and potential solutions.

We all agreed that gender equality was important for society because the structure allows for better allocation of resources and increases access and opportunities to a larger part of the population. This justifies the feminism movement because it brings to light the problem of gender equality and moves us towards a future where society is better.

There are certain realities that cannot be changed. Hormonal levels are different, general physicality is different, and both sexes have their own benefits in society.

Therefore, solutions involve creating opportunity rather than achieving equal results. For example, due to physicality, it doesn’t make sense to require equal number of males and females in the military, but there should be opportunities for women who can hit the same thresholds to be part of the team. In the workforce, gender job issues can be solved by being more transparent about the necessary skills of the job and allow both males and females the same number of baby days off. There should be more policies around preventing domestic violence and better laws to help catch perpetrators.

We can already see the gradual change with more people speaking out and making everyone more aware. The change will be gradual and as long as we continue to educate ourselves and push for better government policies, we see a future where men and women find themselves in a more equal world.

M.E.T.H. (Make Everyone Think Harder) are interactive events where participants learn, brainstorm, and share ideas. Participants need to bring with them their creativity, philosophy, and a good amount of open mindedness.

The events are designed to be slightly uncomfortable and touch on potentially sensitive topics with the goal of bringing out opposing view points, thoughts, and ideas.

Events are currently being run in Shanghai.

After becoming an adult and entering the real world, conversations are typically centered around money, business, love, or pop culture (i.e. Tiger King). I miss the intellectual conversations I use...

I ran the first METH event two weeks ago with the topic: “Police Brutality and Racism”. The session went really well and I would like to share what happened and what was shared. What I’ll be wri...

The third METH event was in mid August. The topic was “Political Correctness + Cancel Culture”. The intention was to connect technology with political correctness, which has created cancel culture,...