I ran the first METH event two weeks ago with the topic: “Police Brutality and Racism”. The session went really well and I would like to share what happened and what was shared. 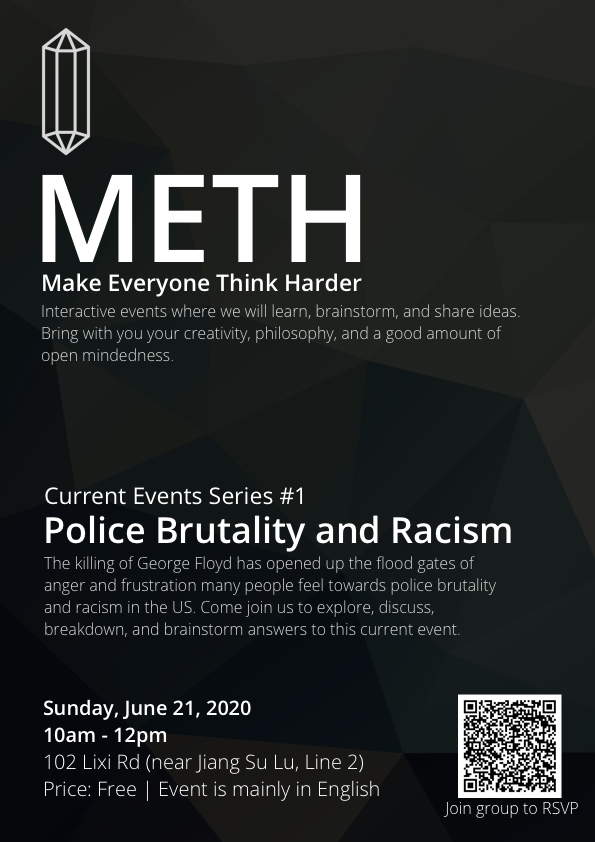 What I’ll be writing is all based on the notes from the conversation we had, so things might jump around a little. This also does not directly reflect the opinion I have, but provided valuable content to help Make Everyone Think Harder.

In the U.S., George Floyd was recently killed by a policeman. The policeman knelt on his neck while Floyd had his hands tied for 8 minutes and 46 seconds. Floyd ended up suffocating to death.

This sparked protests and riots all across the U.S. There was looting and arson and significant destruction to property. The riots were happening to protest against police killings and police brutality, especially against the black community. Did I mention that George Floyd is black?

As the protests went on, things started to spiral out of control. Part of the reason was because the COVID-19 pandemic had kept people indoors for way too long, so the protests was a great reason for people to get out. People and companies started choosing sides and if you chose anything other than Black Lives Matter, you would be called out or fired from your job, like the NYT’s chief editor for writing a conservative piece or the UCLA professor who opposed leniency to black students. Escalation continued with an autonomous zone being created in Seattle and Trump threatening that “If the looting starts, the killing starts.

But some good things were happening. There is discussion for police department reforms and even discussions around the terms “whitelist” and “blacklist” to be changed to “inclusion list” and non-inclusion list”.

2. Why is this happening?

Why are the protests so explosive? Why has the entire country come out for this?

Social media is a big factor. It is extremely easy to share ideas today and seeing George Floyd being killed while he was not resisting was highly emotional. It was the straw that broke the camel’s back.

The stress of COVID-19 also contributed to this. Mental health was at an all time low and people’s wallets were also taking a large hit due to COVID’s effect on the economy. The combination of lowered mental health and the highly emotional footage of Floyd’s death created fireworks. The fire was further fueled by Trump’s messaging and the legacy and history in regards to slavery.

There was one practical point that needed to be addressed, but wasn’t. Due to the structure and the system created over time to protect policeman in general, it had created a situation where policemen were immune to their wrong doings, which in turn, created a big problem: systemic racism. The system had already evolved into something where if nobody in the system was individually racist, the system would make it so that they would perform tasks that could be racist.

3. What do they want? And what are some potential solutions?

The unifying banner for the protests was Black Lives Matter. This is because the police brutality towards black people had gotten so bad that black lives were being extinguished by the police in far higher numbers than any other groups of people for reasons that were not always clear.

The protestors wanted to seek for equality. That black people and white people could be treated equally. The first part of this is police reform. There should be more police accountability and there should be less police immunity. The second part is economic equality via healthcare, education, housing, job opportunities, etc, because the real culprit of everything that is happening is systematic economic inequality.

There is an interesting dynamic as the middle class disappears. When people are disenfranchised, they will lash out. In this case, there are a lot of white people that have lost their middle class status and are taking it out on others. Racism has increased in part due to the economic woes of others.

Education is obviously going to be a big part of this, but that is much longer term. Everybody needs to play a part, especially the media, who are currently making matters worse by dividing and targeting certain audiences and creating echo chambers.

Lastly, there needs to be a strong drive in the direction of economic equality. Not actual economic equality, but something in that direction to help the disenfranchised get back on their feet and to re-build the middle class so that the poverty class does not get pushed to the extreme. Otherwise, the protests that we have seen so far would be nothing compared to what will happen.

M.E.T.H. (Make Everyone Think Harder) are interactive events where participants learn, brainstorm, and share ideas. Participants need to bring with them their creativity, philosophy, and a good amount of open mindedness.

The events are designed to be slightly uncomfortable and touch on potentially sensitive topics with the goal of bringing out opposing view points, thoughts, and ideas.

Events are currently being run in Shanghai.

After becoming an adult and entering the real world, conversations are typically centered around money, business, love, or pop culture (i.e. Tiger King). I miss the intellectual conversations I use...

The second METH event was in mid July and I had not come around to writing summary until now, nearly 6 weeks later. The topic was “Gender Equality + Feminism” and the goal was to invite a equal num...

The third METH event was in mid August. The topic was “Political Correctness + Cancel Culture”. The intention was to connect technology with political correctness, which has created cancel culture,...

Racism can only be Solved by being Better than Them